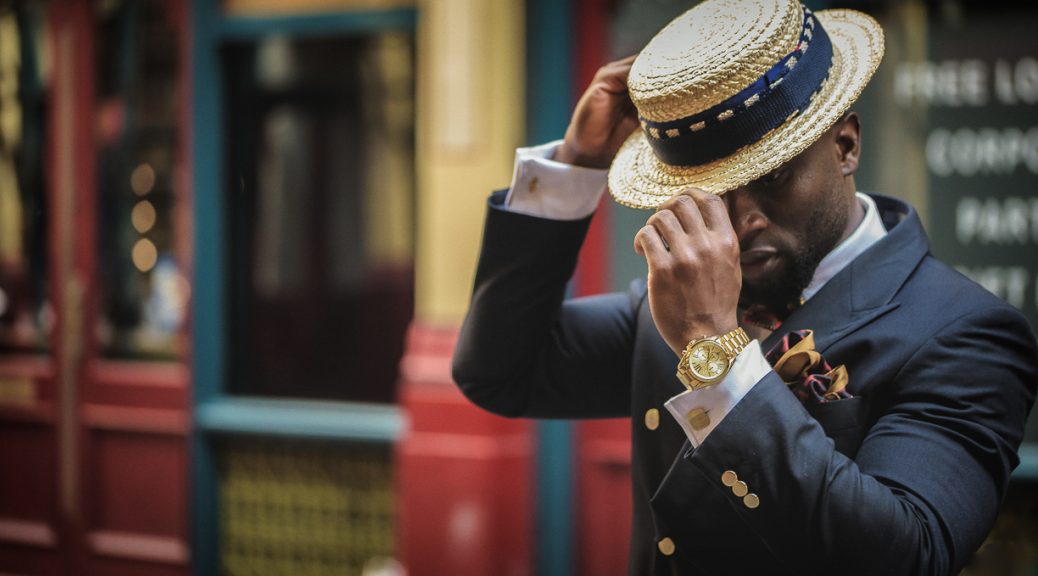 So basically I asked my good friend @charlesnaso (@augustusnas) to do this 30s fashion inspired shoot last year knowing he always gives me the shots I want. It is always a joy working with this brother. 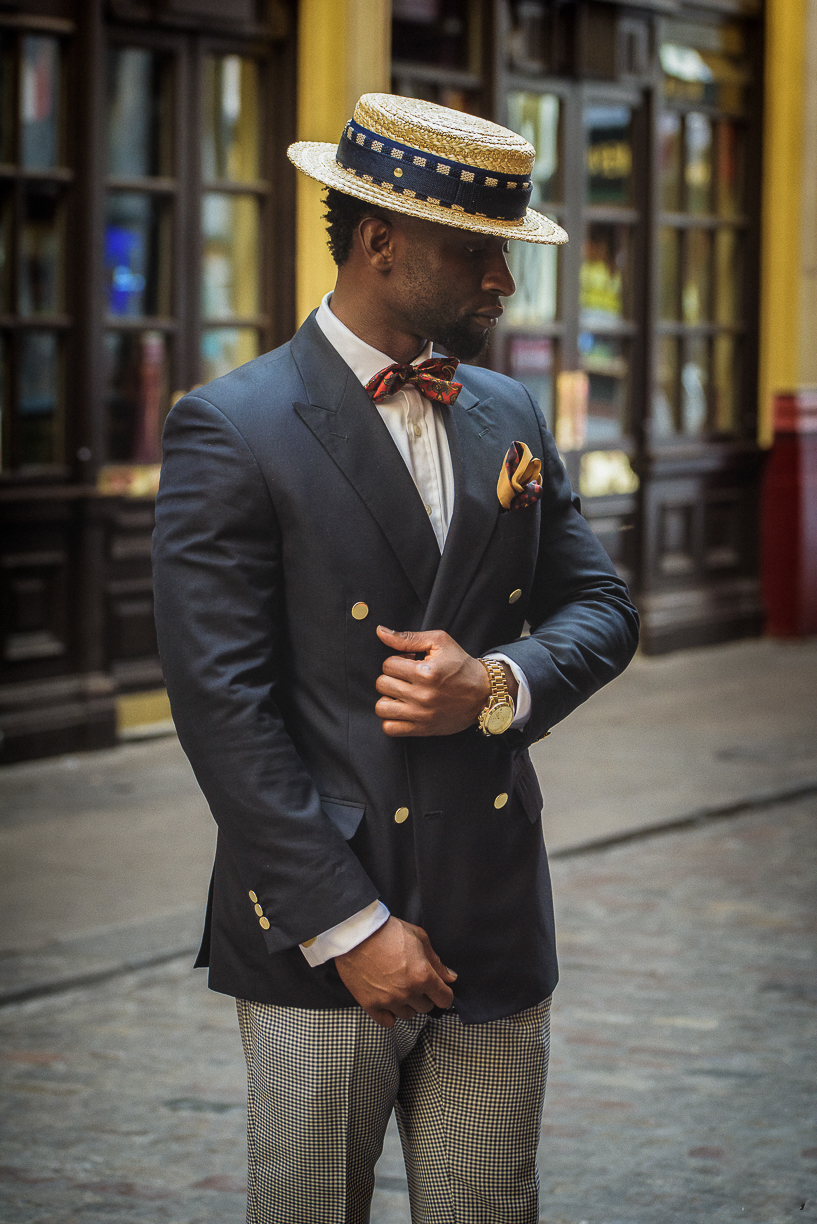 The idea for this look is to channel a 1930s gent with a modern twist. As modern fashion continue to edge more towards street style, from time to time, I try to recapture the essence of a true gent from the perspective of style. Portraying a gent through fashion is not just about what you wear but how you carry yourself when you wear what you wear. 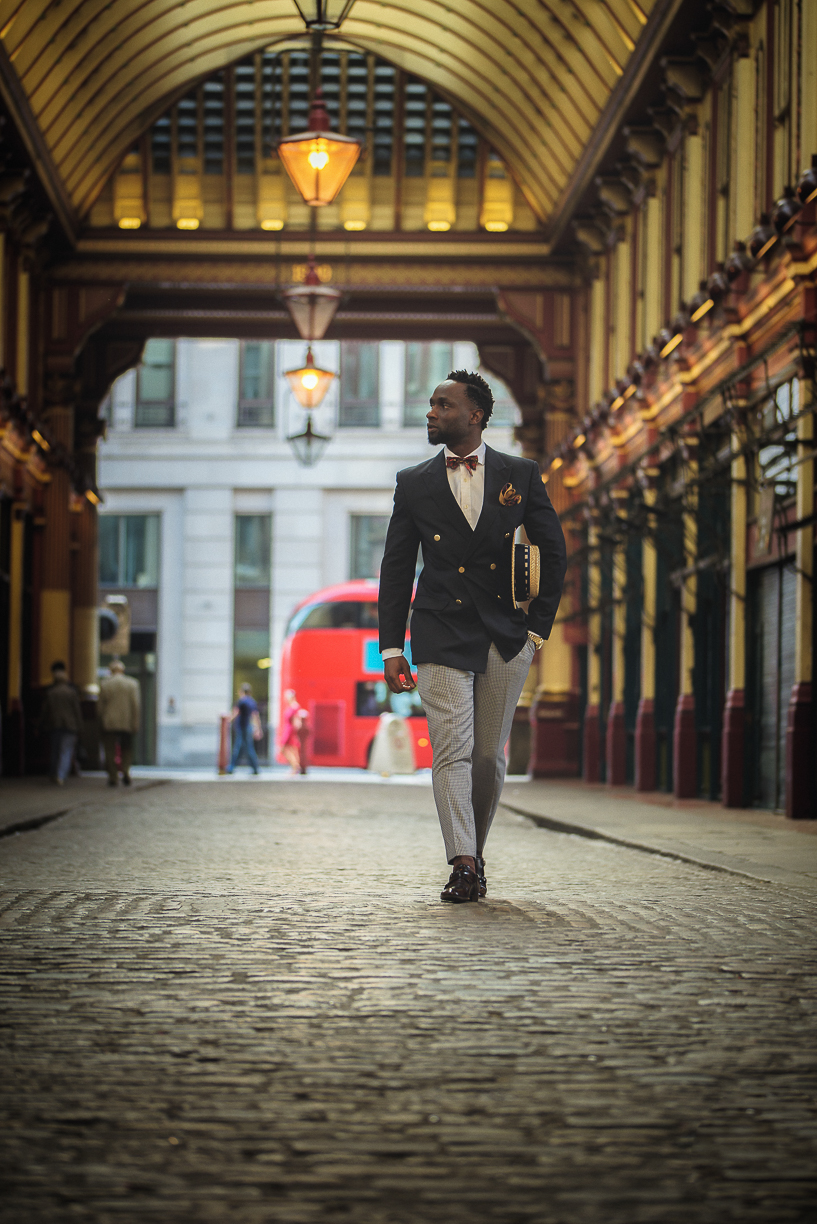 I think it was one of the great English novelist Anthony Trollop who once said that “though it is much to be a nobleman, it is more to be a gentleman“. I couldn’t have put it better. In fact no one could have said it better than he did. 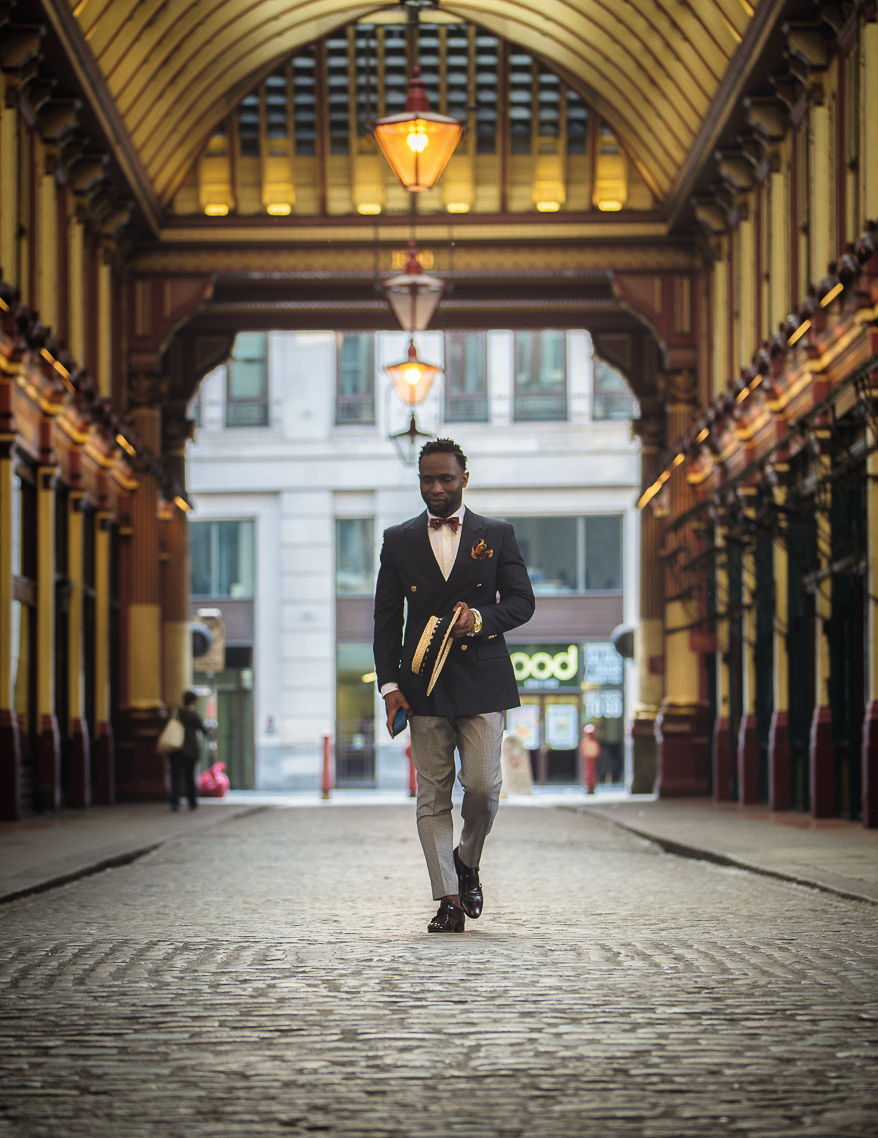 The term gentleman itself was derived from two french words “gentilz” and “hom” and refers to a man of good and courteous conduct. A quick search using google reveals the word to mean “A chivalrous, courteous, or honourable man“. 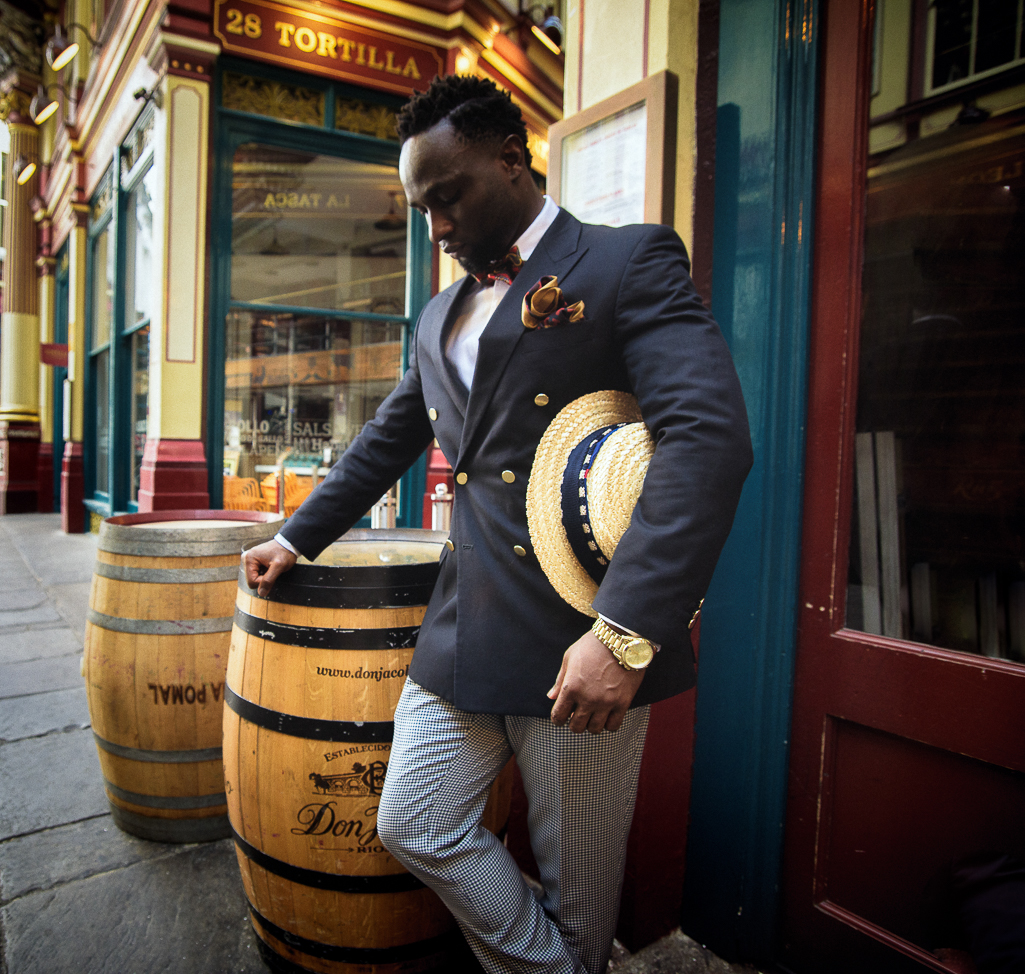 Anyway back to what I was saying. Portraying a gent through fashion entails  much more than just putting on a suit and its accompanying accessories. It has a lot to do with the attitude you wear it with. The panache (another french word) one wears what they wear. 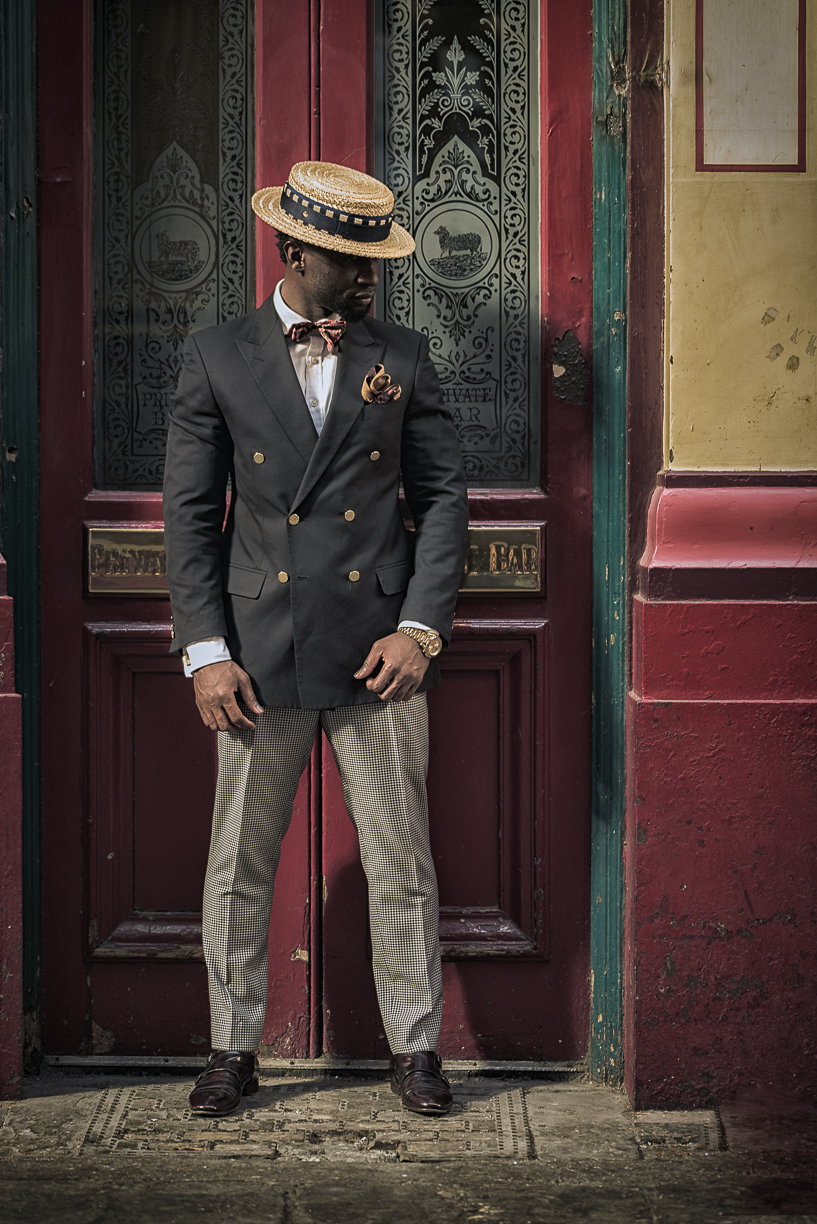 Without further ado, allow me to describe this look using three main items; the hat, the double breasted blazer, and the bow tie.

The hat as you can see is a straw boater. A boater is referred to as a summer hat generally associated with sailors and Jazz players. Believe it or not there was a time in western society that a gentleman would not leave the house without wearing a hat be it a straw hat or any other type for that matter. During that era, a gentleman’s look is never complete without a hat hence the reason why I included the straw hat to create this look. 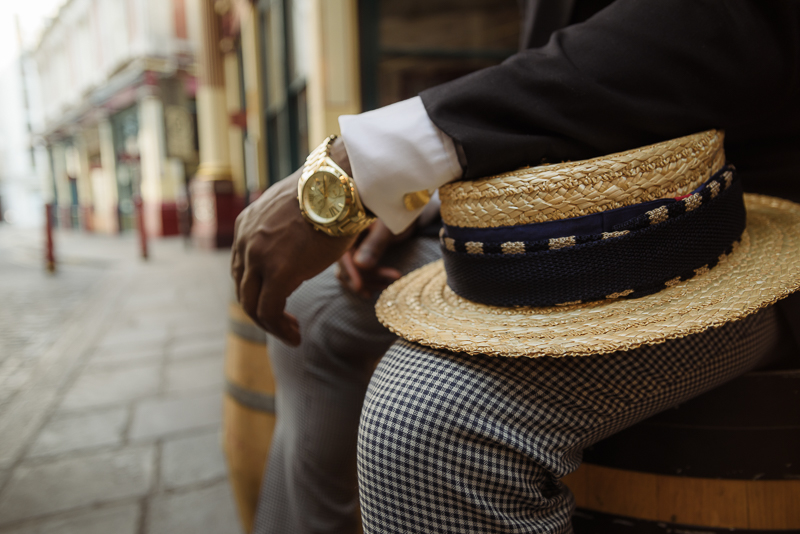 As I have said in many posts before, any man serious about styling themselves as a gentleman has to have at least one blazer in his closet. This is a staple that is worth investing in. My choice of blazer for this look is a double breasted on which I absolutely love. The double breasted blazer has its roots in the sporting world as a casual garment referred to as a Reefer. Over time, this was transformed into a more formal wear. Nothing beats double breasted blazers in my books. It brings out so much unrivalled character and panache. I think my choice of navy with gold buttons carried the right sentiment for the era. 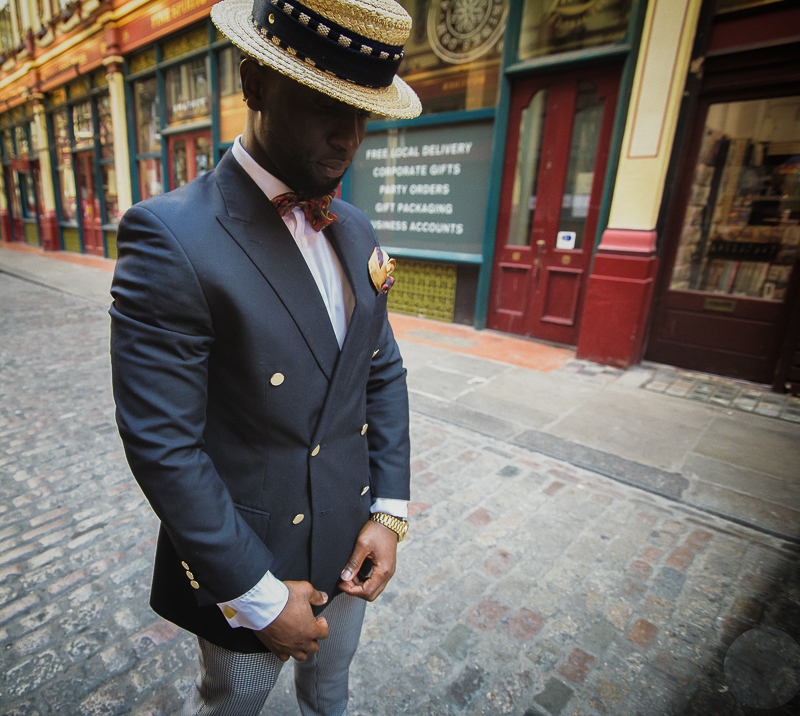 The Bow tie is another staple in my closet. I personally think that wearing a bow really sets you apart for all the right reasons and every gent should have at least a couple.

It is believed what we know today as the bow tie can be traced back to the 17th century, worn by the Croatian army in what was known as the thirty years’ war between 1618 and1648. The purpose of this neckwear was functional which was meant to keep the collars of their shirts together. At the end of the war, the French army turned this otherwise functional piece of neckwear into a fashionable accessory. In fact you can read all about bow ties in a post I did some time ago here.

The gold, navy and red colours of the bow nicely match and complements the rest of the look.

All three items listed above played a major part in the 1930s as far as men’s fashion is concerned.

The choice of wearing fitted cropped trouser with a pair of double monk strap shoes was to give the look a modern twisted.

The location for the shoot was Leadenhall Market, London which I think is befitting for the era. 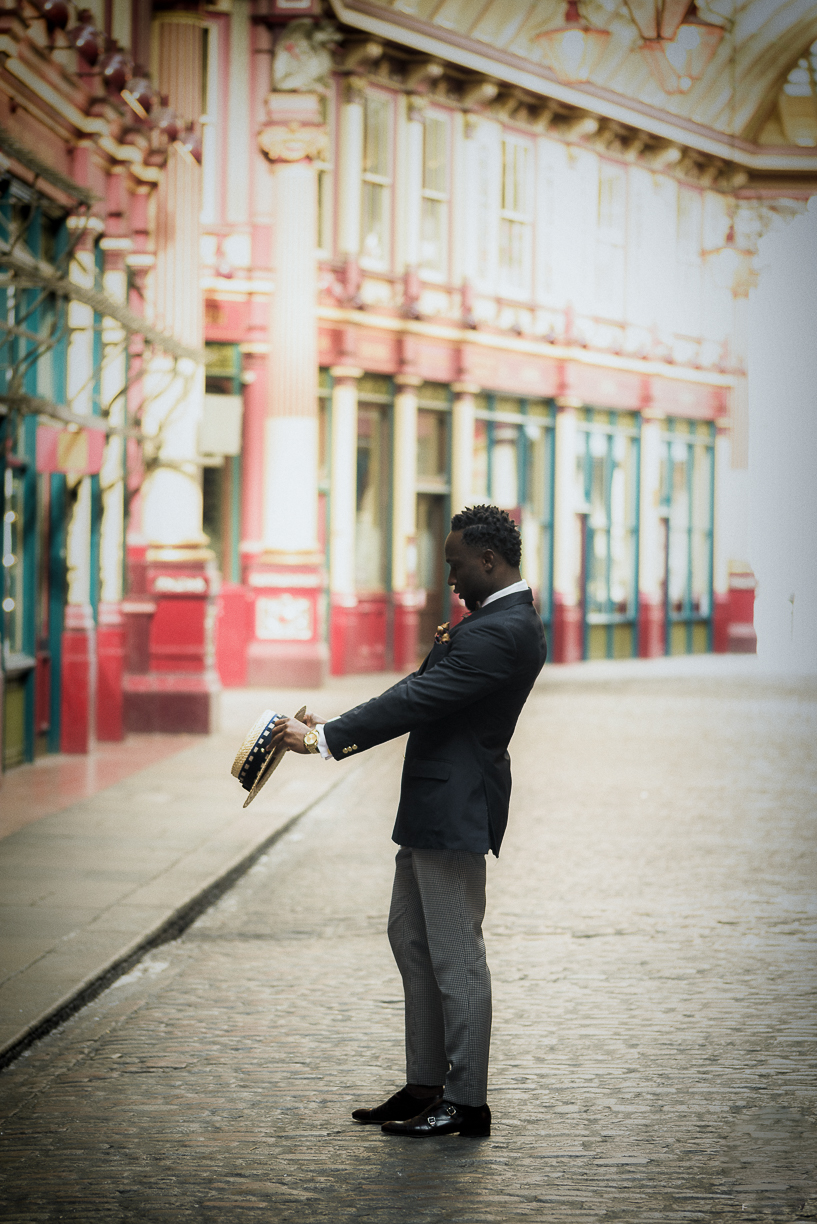 I hope you are all enjoying summer so far. Please subscribe to my instagram and twitter pages for daily updates on style, travel, art and culture, fitness and more.