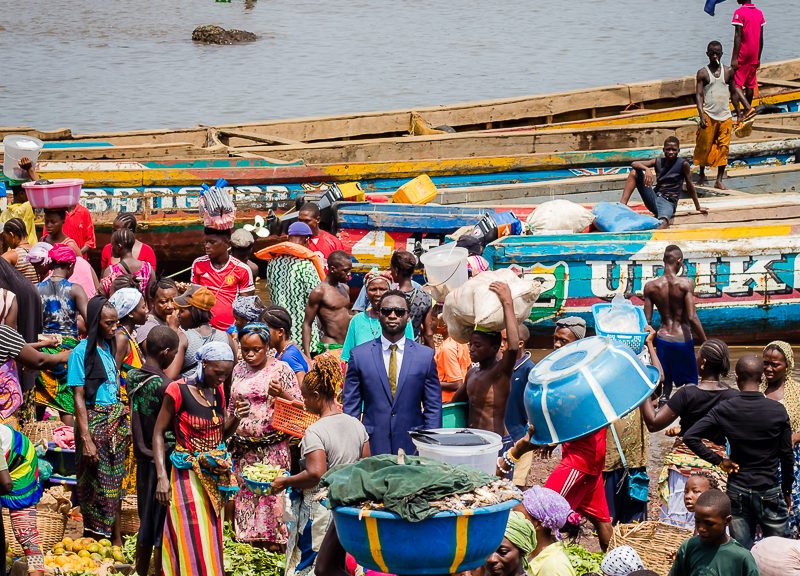 Cultured in Culture, or The Crowd – My people, or Standing out “with” the crowd or so many other titles I could have given this post looking at the photos my sister took of me on holiday in Freetown.

The idea to do this shoot was borne out of a strong desire to capture Freetown or even the people in a way that is very unassuming and unrehearsed. I had no desire to take photos at the plush side of town whether along the peninsular where you will find some of the most beautiful beaches in the world or indeed on the beautiful hills to the west of town. Government Wharf itself has a long and interesting history but I won’t go into it now. Partly because I do not know much of the history but yeah lets just leave that along shall we lol. So I will leave that to the history buffs out there to dissect.

Now where was I? oh yeah the reason for shooting at the Wharf. I personally think the Wharf represent the true hustle and bustle of Freetown in a way very few places do. It shows a people with unique individual stories that come together for a common purpose. The purpose of buying or to selling, rendering a service or solicit one, to see or to be seen. To chisel out a living from their peers or indeed from more well off people who come to the market in search of a good bargain. The whole area is overflowing with people from the top of the street leading to the centre of town to the banks of the sea which harbours the boats that bring in the day’s catch of fresh fish. Every time I look at one of the photos from the shoot, the first word that pops into my head is crowd. It is quite intriguing how a mass of people with different methods or approach of doing things can work so well together. From a distant, it looks one hell of a shipwreck but a closer look will reveal a very complex system which allows everyone to function in unison with each other. My predisposition to the term crowd was challenged and I actually had to google the dictionary meaning of the word which revealed:

I think the second definition above fits perfectly into this scenario. I wanted not only to capture those moments in a shot but I wanted to be a part of them. I wanted to feel the pulse of the crowd. I actually wanted to belong.

The problem I face in my want to belong is that as much as I look like the people at government wharf, I do not have a common interest nor was I there to carry out the same activities as the rest of them. How can I belong to a people who would have to go down to the wharf literally every day to hustle in order to afford the next meal whilst I globetrot in the name of passion and doing what I “love” doing? A people who would stand under the hot burning sun 8 hours a day, seven days a week but still cannot afford basic healthcare whilst I moan about the waiting time at my local NHS clinic in London. How can I belong to a crowd of people whose reality is so different to mine?

How can I even begin to fit in when the very clothes on my back show me up from a mile. I could drape myself in layers of anakra for days but that wouldn’t make the slightest of difference. But then again, why would I want to change my outward appearance sartorially to fit into any circle at all?

So in my Suit Supply suit, Hawkins and Sheppard shirt, Burberry tie and Paul Smith shoes, calmly walked down the famous steps of government wharf to be in and one with the crowd. The market women yelling out the names of their goods accompanied by the prices, the fishermen shouting out to the young men carrying baskets of fishes on their heads all form an incoherent but consistent buzz. The smell of the fresh fish with colourful the vegetables nearby added to the perfect ambience of a typical African market scene.

A few handshakes, smiles and short conversation for permission enabled me to shoot peacefully and got the results I wanted.

Even though our realities couldn’t have been more different, at least for that brief moment, I was one with the crowd.

Crowd (kroud) – A large number of people united by common characteristics, MY PEOPLE!