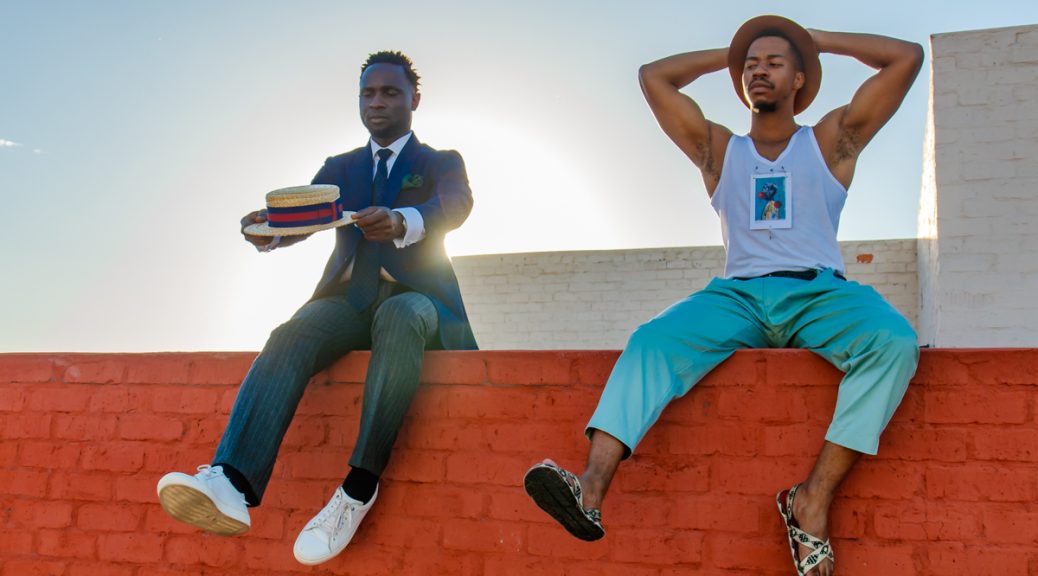 Yanga Yaya Madlala is a Cape Town based performing artist and creative. He is one of those people I refer to as the new voice and face of the South African creative industry. I have been a huge fan of South African creativity in the form of music, fashion, and arts and culture for some time now.

During our first meeting in March when I was in Cape Town, I couldn’t wait to tell Yanga how inspired I am with young South Africans like himself and a few others. The likes of Trevor Stuurman, Kwena Baloyi, and the founding members of I see a different you have always made me curious, to say the least. The imagery always tells a compelling and authentic story of their own. They present their life and culture in such a way that it sometimes forces me to dig out my authentic self. Trevor recently worked with supermodel Naomi Campbel through Arise Africa which in itself show the level of creativity of this young South Africans I speak of. 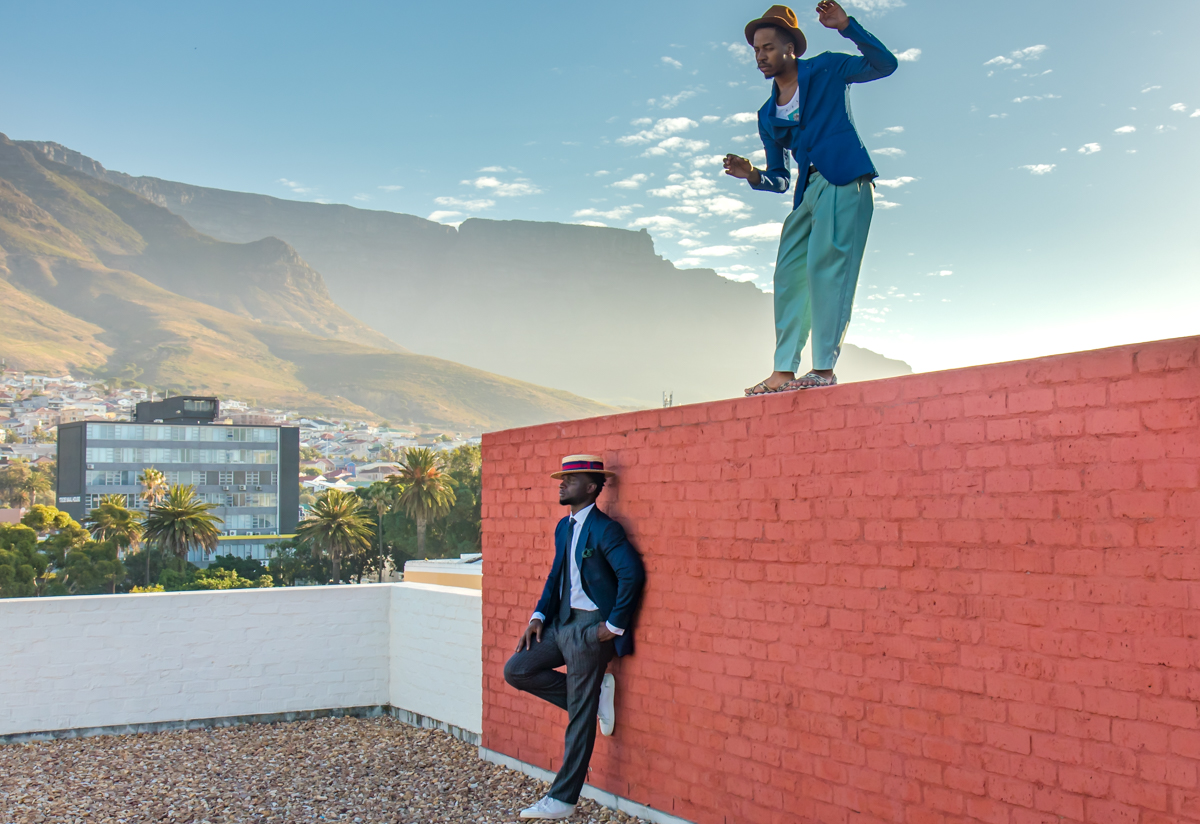 Anyway, back to my story. When Yanga and I decided to do a shoot together, we had no idea the form the shoot should take. We had no theme nor concept but we knew we wanted to create something. I knew his fashion style was different to mine but that did not stop me. In fact, that was one of the reasons I wanted to work with him. As a performing artist, I knew he would bring a different dimension to our work. 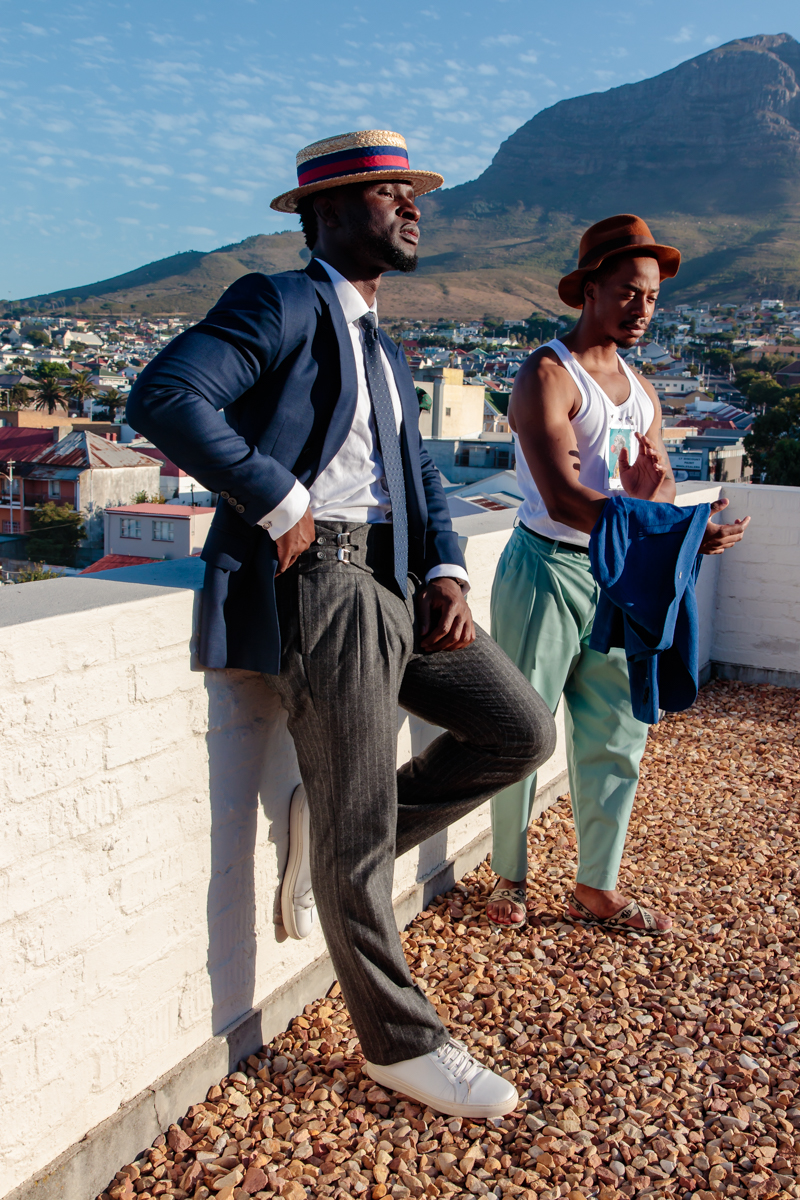 Another thing I should mention is that Yanga is a practicing medical doctor with special interest in emergency medicine. Yep, not only can he sing and dance very well, he also has brains to makes a difference in his community and beyond. In a piece for GQ South Africa in 2016, Yanga said “The aim is to show a different view to what young professionals nowadays take interest in’. ‘In other words, doctors aren’t all nerds – we can also be as fun and creative as artists and fashion designers.’ I couldn’t agree more with him. In fact, I only found out he was a medic when we had our first breakfast with our respective girlfriends. I was astonished that someone so creative is also a medical doctor by profession.

On the day of the shoot, Yanga took me around his neighborhood which had a lot of cool spots to shoot at. We ended up going back to his block as the sun gradually went down. The views from the rooftop were just breathtaking. The mountain on one side and the city on another. 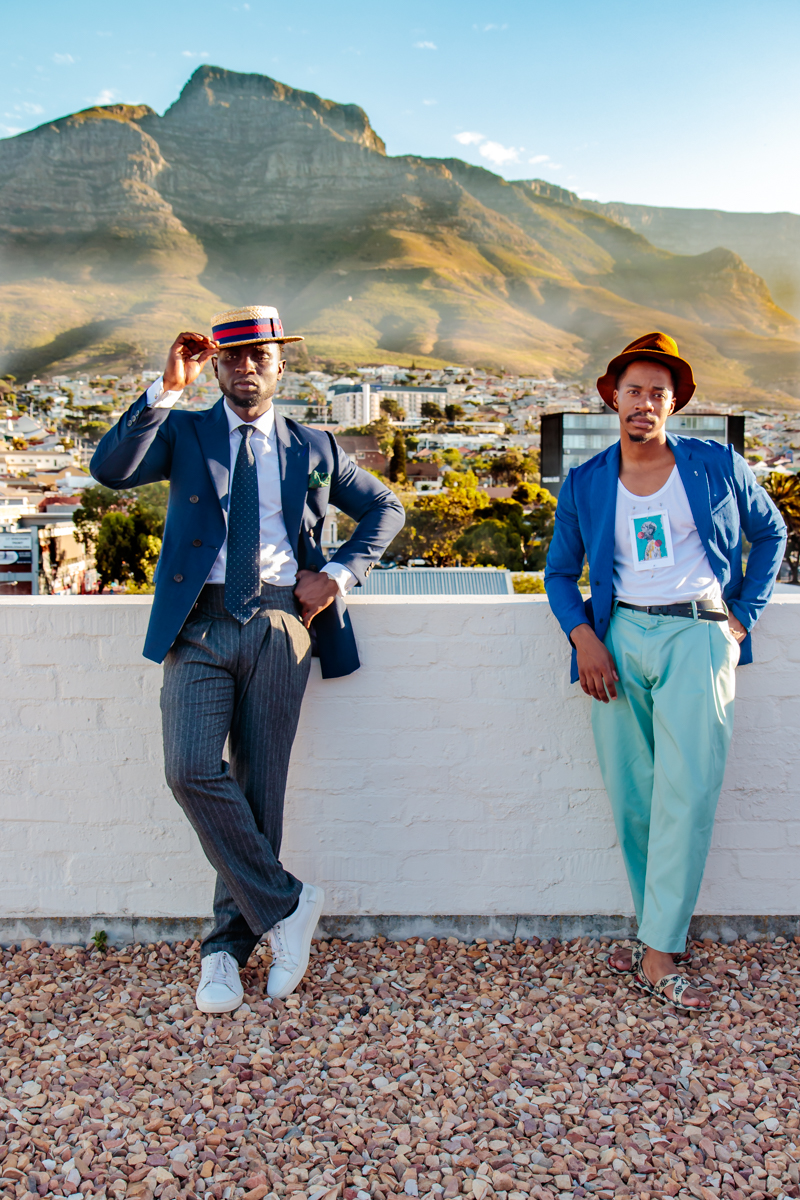 Yanga describes his style as a cross between Afrocentrism and bohemian with a minimalistic take. His fashion sense is definitely a window into his creative thought process. Whilst my style represents cultures and eras near and far with a personalized sartorial take, his style is influenced by the 80s with a healthy dose of colour. When he is not saving lives or singing and dancing, Yanga expresses himself artistically through his fashion. 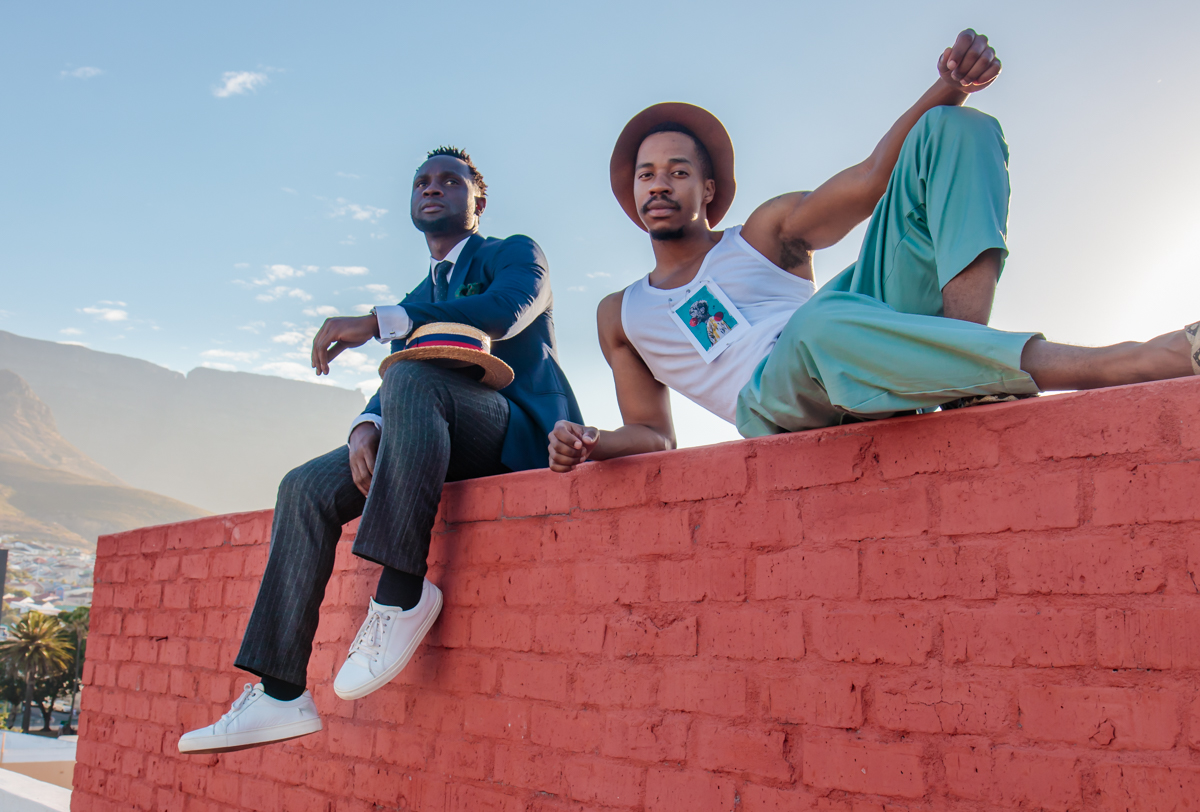 As you can see from the shoot, Lines and curves used in our emphasized poses witnessed by the beautiful table mountain enabled us to give fashion some movement and dynamism. Personally, the beauty of being a creative who travels is the ability to create and collaborate with like-minded people like Yanga. It is such a beautiful thing to be able to lift each other up whilst sharing our different creative talents. And not just sharing it with each other but also doing so boldly with the world. As  Marianne Williamson said and I partly quote:

“We ask ourselves
Who am I to be brilliant, gorgeous, talented, fabulous?
Actually, who are you not to be?
You are a child of God.
Your playing small
Does not serve the world.
There’s nothing enlightened about shrinking
So that other people won’t feel insecure around you.
We are all meant to shine,
As children do.
We were born to make manifest
The glory of God that is within us.
It’s not just in some of us;
It’s in everyone.
And as we let our own light shine,
We unconsciously give other people permission to do the same“

Yes, we grow as we lift each other up and in this case, we have been able to express ourselves creatively using fashion. 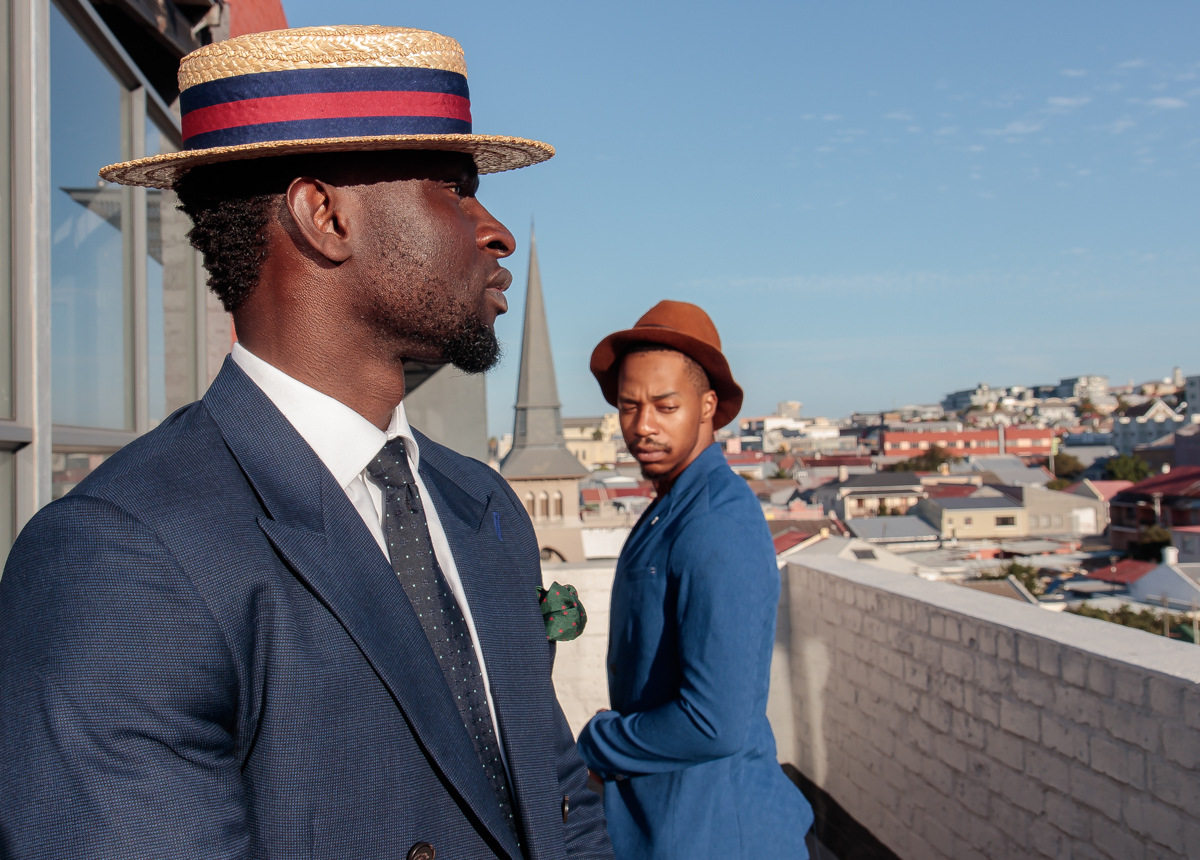